The Producer's Corner with Spud Too Tight 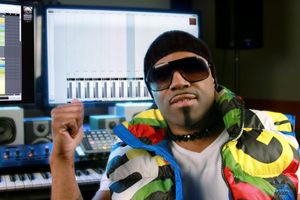 Spud is a gifted, prolific keyboardist and composer. I've requested some of his tracks already for future projects we will work on together. He is also one of the very few producers in the game that can emulate the "New Jack Swing" sound to measure up to my standards of excellence. His show is a great attribute to the music industry" says Teddy Riley.

Music Producer/Composer/Tech Innovator Spud has for over two decades branded his unique sonic signature sound and cornered the market in the Twin Cities  as being one of the busiest composer producers.

He has created tracks for upcoming artists, drive time music for Urban and Smooth Jazz radio stations, music for national a documentary centered around one of the recording artists of the famed Grammy Award Winning group Sounds of Blackness to producing music for award winning radio and television commercials, which included a voice-over with Oscar Globe winning Actor, Director & Diplomat Sidney Poitier on Prostate Cancer.

Spud is currently producing phenomenal music for upcoming projects and is being branded and marketed as an orchestral and multi-genre composer for film/documentary, television, multi-platform streaming services and other music related projects. His extraordinary talents as a musician, gifted ear for emulation and expert audio engineer brings the ultimate experience to visual projects.

For the past 5 years he has also conducted music technology video tutorials on his YouTube Channel.